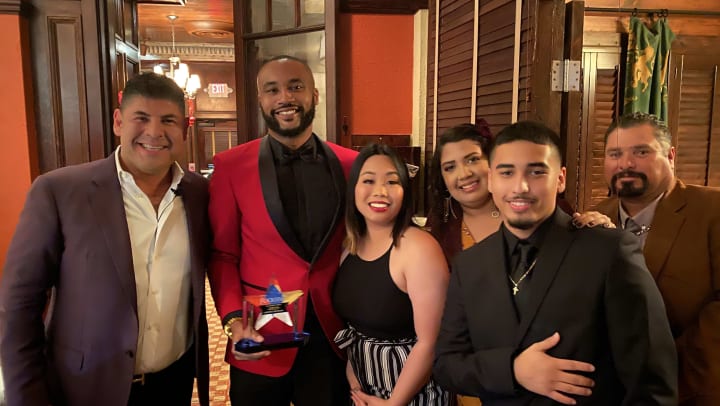 Thank you for joining us once again for a closer look at one of our Rockstar team members. Last month in our first edition we featured Kiwi Hall, if you missed her story read about her here. This month I got to spend some time with Aaron Twyman and hear about his journey before and in Rockstar. Aaron has been a part of the Rockstar family for almost four years, with his anniversary coming up on May 26th.

Aaron got his start at a temp agency in 2014 with BG Multifamily. Eventually he was able to land his first leasing position at a Class A property in Cypress, Texas. With his strength and determination behind him, it wasn’t long before he found his way to Rockstar where he has continued to show an inspiring work ethic. It wasn’t long before Aaron was promoted to a property manager in 2016. Aaron had received most of his manager training from Daniela Flores, a Rockstar Regional Director. At the time a Multi-site manager, Daniela used her knowledge to prepare Aaron for his upcoming promotion and he credits much of his success to her.

Having since been promoted from a Property Manager to a Senior Property Manager, Aaron spent some time with me speaking on some challenges that he faced in his previous position. As a property manager, “the most challenging thing was overseeing other employees, not only did I have to make sure I was preforming but I was directly responsible for the performance of my other three employees at Deerbrook Garden,” Aaron said. He didn’t let the pressures of being a manager get the best of him, Aaron was able to overcome this challenge with constant training and by check on learning. He was always sure to check and verify that tasks assigned were completed. “I trained them from the ground up as if they were brand new to the company to ensure that they were doing things correctly,” Aaron said.

“The most fulfilling thing about being a Property Manager was instilling my Rockstar Way into my employees that looked up to me and followed in my footsteps,” Aaron said when asked what the most fulfilling thing about his previous position. Aaron feels that the best thing you can give someone is an opportunity and he was sure to see what his employees would do with theirs. Seeing them grow and gain knowledge under his wing brought joy and satisfaction to him. Needless to say, being a Property Manager was definitely a fulfilling role that he was happy to fill and prepare his employees for as well.

Moving from his previous position to his current one, Aaron is excited about the potential being a Senior Property Manager will bring. He is most excited about once again being in the unknown. He recently transferred to Rosenberg and was also overseeing a new acquisition in Corpus Christi. “New things are exciting to me and I welcome pressure, I see it as a chance to see what I’m made of and to push myself to further limits,” Aaron said. Looking towards the future, Aaron plans to become a Multi-site manager and complete his Certified Apartment Portfolio Supervisor (CAPS) credential program, further solidifying his path to success in his career.

Aaron finished with what he loves about working with Rockstar, “I love the opportunity, company events and, most of all, the recognition for outstanding performance.” We are so happy to have someone like Aaron in our Rockstar Family and we couldn’t be prouder of his work ethic and future potential. Aaron told me his favorite quote, which you will soon see, he exudes in his everyday endeavors.

“Do not go where the path may lead, go instead where there is no path and leave a trail.”-Ralph Waldo Emerson

Did you miss our podcast episode featuring Aaron? Check it out here or on your preferred podcast streaming service.

With Week’s End Already Here, Rockstar Residents And Employees Alike Are Getting Ready For Next Week, Spirit Week!

Do More Than Just View a Floor Plan with RockstarVR

Rockstar Capital Gives $250 to Every Employee Through #RockstarCares